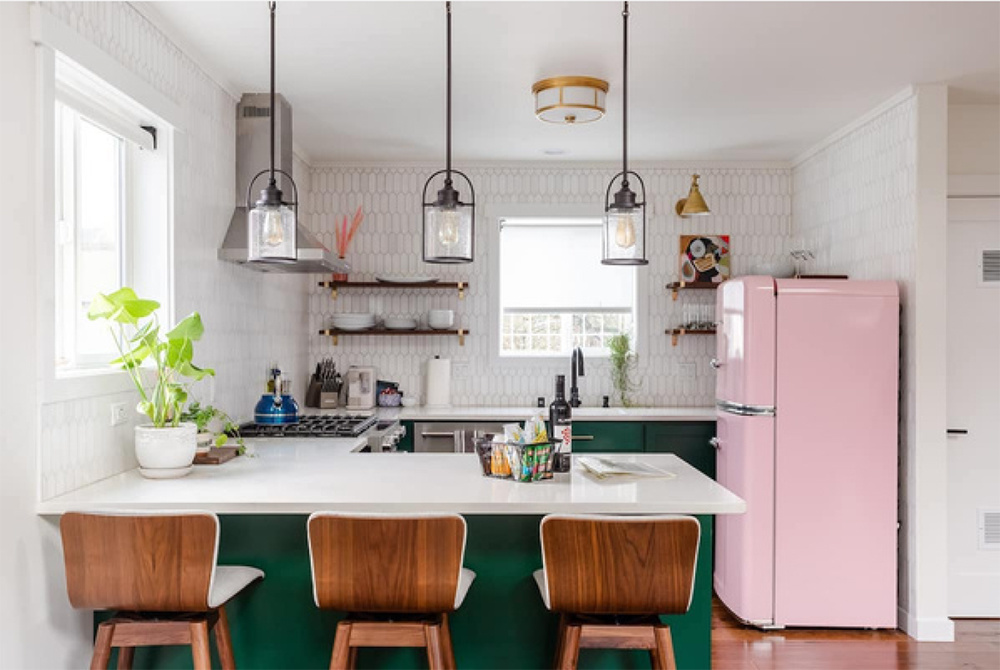 Fight the fright: Big, bold design changes don’t have to be scary

Ghosts, goblins, ghouls — all spooky, to be sure. But for many people, Halloween frights don’t compare with the terror of making big design changes to their home.

“It can feel very scary, because it’s unknown,” says Robin Daly, the owner of Robin Daly Color & Design, which serves clients from Seattle to Bellingham. “It’s scary to jump off the precipice, and it is an investment to do that.”

Becky Ducsik, principal designer at The Phinery, a design firm in Seattle’s Phinney Ridge neighborhood, says the financial investment required for a redesign can spook even the bravest of homeowners.

“Most of these projects are pretty expensive, and it’s concerning to make these purchases and not really have that confidence,” she says. “Do I know what I’m doing? How is it going to look at the end of the day?”

The feeling is one that Komal Kapoor knows well. She has been working with designer Jennifer Falbo to revamp her Issaquah home, which Kapoor felt “could do with some pop.”

“We definitely went through this experience where we were afraid of every change being made,” Kapoor says. “It was a combination of both excitement and fear. It’s working with a new person who doesn’t necessarily know about your taste, and I was worried about the time commitment.”

Kapoor says she and her husband are “very, very pleased with the end result,” but the process was a new one for them, creating feelings of uncertainty.

“A lot of unknowns,” she says. “We started with putting some ideas on the design board, getting comfortable with that. It became so much smoother after that.”

For her part, Falbo, a designer with The Bespoke Design Firm in Kirkland, understands the nervousness of homeowners embarking on bold changes.

“They’re big, costly decisions that are going to take a long time and that you’re going to have to wait for,” Falbo says.

Jessica Lewis, the owner of Jessica Lewis Interior Design in West Seattle, notes that the sheer amount of brainpower needed to make those big changes can be daunting, as well.

“Decision fatigue, like picking a paint color from the endless paint deck, that can be a challenge for people,” she says. “It’s important to remember your home doesn’t have to be magazine perfect, and you can go bold. You should be brave, and always add in that touch of your personality and your style without shame. Go for it.”

If you’re still frightened by the idea of changing things up in your home, fear not. Read on for tips, tricks and advice from local pros to incorporate bold new designs — without all the dread.

The first step is pinning down your ideas and getting them to a place where you can visualize them.

“One really great tool is to find three keywords to create your overall vibe,” Daly says. “So, you could say ‘farmhouse’ — that gives us kind of a shortcut to know what we’re talking about. But what if instead you said ‘collector’ and ‘antiques’? It might give you a different framework.”

The three-words technique is also good for ensuring your design reflects your unique self, she says. “It’s your own specific design key.”

If you’re getting stuck for ideas, Lewis says, head to the internet for inspiration.

“Researching online is a great idea,” she says. “Try to find photo examples where people have done something similar to what you’re looking for, because visuals really make all the difference. Places like Pinterest or Houzz, those are great sources.”

Once you’ve gathered some ideas, Daly says, make sure you have a plan.

“It’s kind of like a road map,” she says. “If you’re driving from Seattle to New York, you know where you’re heading. You could take a couple different paths to get there, but your final destination is New York. So having a plan in place really makes your journey to designing a new space a lot more pleasurable, more fun.”

And don’t forget the importance of a budget.

“Have a budget, and make sure it’s realistic,” Daly says. “We often see on these TV remodeling shows when they throw numbers around, and they’re not real. So make sure you understand what the numbers are very early in the process. Once you define [your budget], you can have fun. If you’re worried that choosing expensive tile is going to break the bank, that’s no fun.”

Start with the small stuff

Beginning with the smaller aspects of your new design can help ease you into the process. Lewis suggests starting with a can of paint.

“Paint colors are something that can change the whole room instantly, and it can be done in a day,” she says. “Even painting a fireplace or an accent wall can change everything.”

Accessories are another relatively small change that can have an outsize impact in a room.

Falbo says adding more colorful drapes or just modernizing the hardware or rods can change a lot about a space. The same is true for adding a new area rug.

“I typically recommend that clients keep the core items of their home more neutral — the big-ticket items that you would have for 10-plus years,” she says. “Then add in your drama and your flair with things that are more easily changed out, like your cabinet hardware or a really eccentric pendant over your kitchen island.”

Small places are a great place to be bold, Lewis says. “You could add an overly embellished [item] or a unique color, or add a wild wallpaper for the background of your Zoom calls. It’s a low-commitment opportunity to try something new and push your comfort zone a little bit.”

Don’t be afraid to follow your heart, Lewis says — wherever it leads.

“If you love a really zany orange sofa, then do it,” she says. “And if you’re feeling hesitant and you have a little bit of reservation about it, you can get that statement piece, but then add in some accessories that are more of a light, neutral color to tone it down.”

Another good way to dip a toe into a new design is to change areas that are not often seen by visitors, Ducsik says.

“A lot of clients will say, ‘Oh, I want to focus in on my living room or that entryway’ — you know, the first impression coming into the home,” she says. “When you’re making some bolder design decisions, sometimes it’s best to not actually focus in on one of those rooms.”

Starting with a lower-traffic room can alleviate some of the pressure. That way, Ducsik says, you don’t have to worry about “what are people going to think when they walk in and react to this design?”

“We recommend using a master bedroom to make some of those bolder decisions, especially when it’s the first room you’re tackling,” she says. “We find that clients let loose a little bit more with those big decisions when it’s not such a high-pressure type of room to decorate.”

Give pieces a chance

Two years ago, Carrie Moore and her husband, Robert te Winkel, tore down the detached garage of their home in Seattle’s Greenwood neighborhood and built an 800-square-foot space to rent out, working with Ducsik to design it in an eye-catching way.

“We made some major, bold decisions because we really wanted to have that space stand out online when people are looking to rent,” Ducsik says.

Among the attention-grabbing pieces she suggested: a pink refrigerator.

Moore was sold on the idea pretty quickly, but te Winkel was not on board at first. “He was very concerned about it looking just wild. Like, ‘Who puts a pink refrigerator in their kitchen?’ ” Ducsik says.

Eventually, Moore says, after seeing the refrigerator in place next to the emerald-green cabinets Ducsik had installed in the kitchen, te Winkel came around to the idea.

“He’s now fully on board, and it doesn’t even stand out to us anymore,” says Moore, who adds that the rental space is constantly booked.

“It is definitely something that guests comment on and really love,” Moore says of the unit’s unique design. “I have so many write to me afterward and say, ‘I took notes while staying there, and I’m thinking of ways to change my house.’ ”

The process has also led Moore to feel less fearful about making additional design changes. “I would totally do something bold and unique in my own space now,” she says.

Ducsik has a favorite tip that she hopes will help take the fear out of experience: No design change has to last forever.

“Let go of that feeling that it’s permanent,” she says. “In 10 years, you’re probably going to want something different. And that’s OK.”

on our interior design journey

© Copyright 2022 The Phinery | Designed & Customized by AdVision | Powered by Lightspeed